Shane “Jester” O’Donnell has hiked the AT (twice), LT, PCT, JMT, and CDT.  He’s a co-holder of the record for highest altitude Twister game, and was recently voted the AT Class of 2015’s “Most Likely To Be Wearing A Completely Different Outfit The Next Time You See Him” AND “Most Likely To Tell You How Seriously, Seriously Awesome He Is.  No, Seriously.”  Recently, he claimed a Fastest Known Time (FKT) for what he calls “The Twiple Crown.”  Night Hiking To Mars recently sat down with Jester for an interview about his latest record setting feat.

NHTM: Welcome!
Jester: Thanks!  Great to be here!
NHTM: First of all, tell us . . .
Jester: No snacks?
NHTM: What?
Jester: There aren’t any snacks?  At all?
NHTM: No.
Jester: Bummer.  I sort of assumed there’d be snacks.

NHTM: Right.  Well, first of all, tell us about “The Twiple Crown.”
Jester: Sure.  “The Twiple Crown” involves hiking the entire widths of the Appalachian Trail, Pacific Crest Trail, and the Continental Divide Trail.  There are a couple of hundred people who have hiked the entire lengths of these trails, but not nearly as many who have hiked the widths.  And in my case, I did it in record time.

NHTM: Tell us more about that record attempt.
Jester: Right, well, my speed record attempt for the Twiple Crown started at the Anderson’s house in Green Valley on December 7th.  I left late in the morning and got to the trail crossing at San Francisquito Canyon Road at 11am, where I walked the width of the PCT.  By the next morning I was in Lordsburg, New Mexico and walked across the CDT near the fireworks place.  From there it was a little more than 1800 miles to the AT crossing at I-40, where I got off the highway, walked the width of the AT, and then went to Standing Bear Farm and had a beer with Baltimore Jack.  Total time: 3 days, 6 hours, 35 minutes.  Not including the beer part.

NHTM: We contacted Jackie “Yogi” McDonnell, a Triple Crowner and the author of guidebooks for the PCT, CDT, and Colorado Trail, and asked her about the Twiple Crown.  Her response was, and I quote, “That is absolutely not a thing.  At all.”  What do you have to say to that?
Jester: Well I’ve got this hat that says it’s a thing. 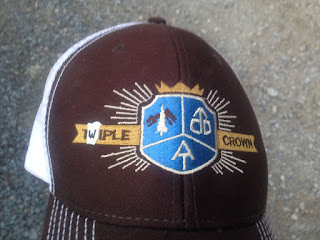 NHTM: That’s a Triple Crown hat with a “W” written on a piece of duct tape covering the “R” in "Triple."
Jester: Look, let’s not get into what the hat is or isn’t.  The point isn't the hat.  The point is, there are people who stick to walking the lengths of established trails, and hey -- that’s great.  But for some of us, we’re pushing boundaries.  Creating new experiences.  I mean, was High-Altitude Twister “a thing” before I set the record for that?  Of course not.  But now it is.

NHTM:  We asked Yogi about High-Altitude Twister, too.  She said, “also not a thing.”
Jester: Well, I think that just proves my point.  Some people stick to the adventures people have already done.  I attempt the adventures that nobody’s even thought of because they don’t make any sense.  I’m like Andrew Skurka, but without the National Geographic article, attention span, or fitness level.

NHTM: Speaking of fitness, how did you train for the attempt?
Jester: I’m pretty well known for not doing any physical training at all, but since this was for a record I had to hit the ground running.  So I decided to prepare for this attempt by thru-hiking the Appalachian Trail, which kind of turned out to be overkill since the Twiple Crown involves about six feet of walking.

NHTM:  And you met Heather “Anish” Anderson while you were on your thru-hike.
Jester: I did!  It was just south of Pinkham Notch.  When I told her about my plan to set a record for the Twiple Crown she said, “that’s so dumb it’s amazing.”  And I have to tell you, to have a hiker of Anish’s caliber tell you that something you’re planning is amazing  is just incredible.  It’s really inspiring and motivating.

NHTM: What were the keys to your success on this attempt?
Jester: Planning.  Gas money.  My focus.  Definitely my focus . . . hey, are those snacks?
NHTM: No, that’s a bowl of fake fruit.
Jester: Wow. They look totally real.
NHTM: You were saying, about your focus . . .
Jester: Right!  The Focus.  Only it’s not a Focus.  It’s a Ranger, a 1992 Ford Ranger, and with over 256,000 on the odometer it has almost as many miles as Cam “Swami” Honan.  I definitely couldn’t have done this without my truck.  I’d also like to thank my sponsors, all of whom asked not to be named.
NHTM: Because?
Jester: Something about “not wanting to be associated with this record.”

NHTM: Understandable.  Do you think anyone can break it?
Jester:  Sure.  It's probably easier East to West because of the time changes.  And staying on I-40 the entire time and hiking the width of the CDT in Grants would probably cut off some time.  But I think you're asking, "can anyone break it?" when the better question is, “why would anyone want to?”

NHTM: True, true.  People who attempt speed records say it can be an emotional rollercoaster.  Did you feel like that?
Jester:  Only a couple of times.  In Texas I had a brief moment of terror when I thought a semi was coming right for me, but it turned out to be a truck towing another truck backwards.  I hate that.  And the night before I finished I was sleeping in my truck fifty miles west of Memphis and thought, “I’m in a country song right now,” which as you can imagine is depressing.  But in the morning I got up, took my pants off, and got back on the road.  504 miles of driving and two feet of walking later and I had the record.  It was exhilarating.

NHTM: It must have been.  What are you going to do next?
Jester: Well, considering the snack situation around here I’m definitely going to have lunch.

NHTM: But after that?  Any plans?
Jester: Not sure.  I heard a rumor that the Appalachian Trail is going to be 0.1 miles shorter in 2016, which might give me just the edge I need to beat Anish’s Self-Supported Record.  So maybe that.  Hard to say.  But whatever it is, it’ll be seriously, seriously awesome.

Note: After this interview we contacted Heather “Anish” Anderson about the possibility of Jester beating her record.  Her response was, “He said that?  Really?  HahahAhaHaHahAhaHAhaha!  Oh God!  HAhaHahAhaHAhahaHAHA!  Oh, man.  Heeheehee. That made my day.  Wow.”
TBW Productions
TBW Productions YouTube
TBW Instagram
Posted by Jester at 10:18 AM